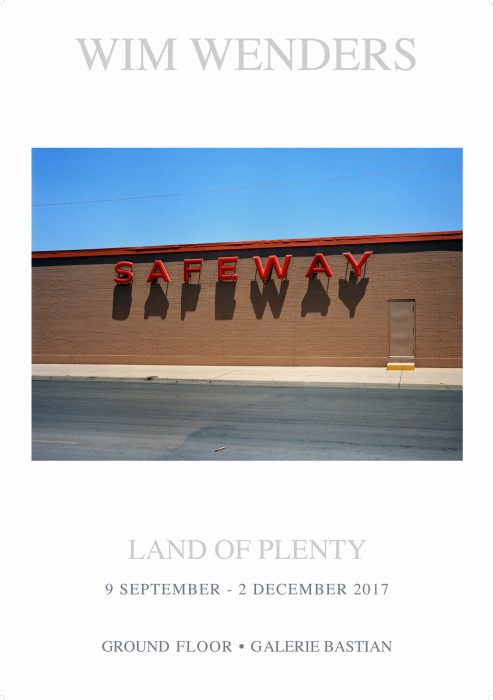 »Land of Plenty« by Wim Wenders opens at Galerie Bastian on 8 September.  The exhibition is comprised of selected photographs, which were taken on the artist’s extensive journeys across North America since the 1970s. This is the second solo exhibition of the filmmaker and photographer in the gallery building Am Kupfergraben in Berlin. Previously in 2009, the artist’s exhibition »Journey to Onomichi« paid tribute to the classic Japanese film »Tōkyō monogatari« (1953) by Yasujirō Ozu.

Wim Wenders’ photographs of the US convey the loneliness of vast landscapes, urban scenarios in bustling metropolises, as well as desolate provincial towns. The exhibition title »Land of Plenty« and the eponymous film by Wim Wenders from 2004, both allude to the promise of the American Dream.  A dichotomy between an old and new world manifests itself in these photographic works – relics of the efflorescence of American culture during the industrial heyday render a melancholic viewpoint. Wenders’ photographs often show forlorn places in which humans merely appear as peripheral characters or not at all – central motifs are a crashed, abandoned airplane, a former drive-in cinema or a Native American cemetery. An illuminated bar with the last guests of the night photographically communicates an homage to Edward Hopper.

Born in Düsseldorf in 1945, Wim Wenders is one of the most influential film directors and photographers of our time. His immense cinematic oeuvre – including »Wings of Desire«, »Paris, Texas«, »The Salt of the Earth« – has been honoured with numerous international awards and prizes. Wenders is President of the European Film Academy and a member of the Pour le Mérite order. In October 2017  The Photographer’s Gallery in London will open an extensive exhibition with the artist’s Polaroid photographs from the 1960s to 1980s. Wenders lives in Berlin with his wife, the photographer Donata Wenders. 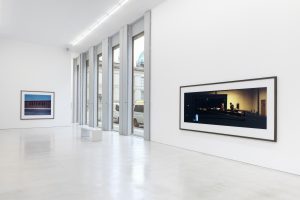 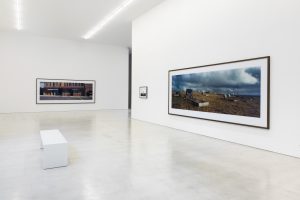