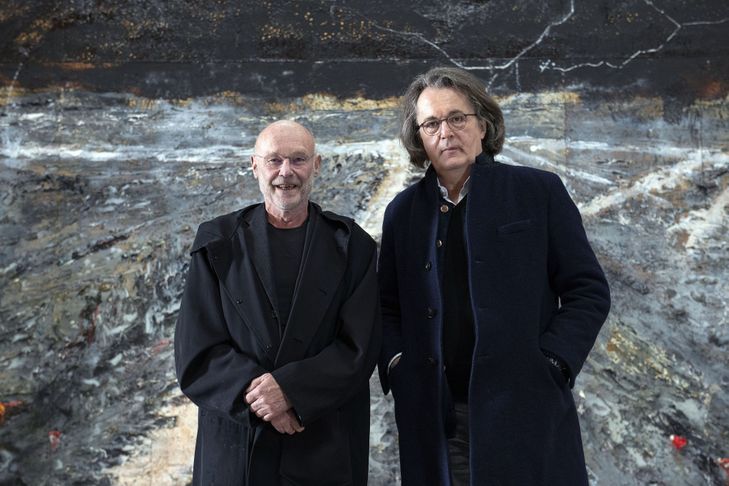 Anselm Kiefer and Pascal Dusapin at the Pantheon in Paris, 11 November 2020.

Anselm Kiefer the new artist of the Pantheon

To commemorate the memorial ceremony of the great writer Maurice Genevoix taking place at the Pantheon on November 11th 2020, French President Emmanuel Macron has commissioned new works by Anselm Kiefer and a composition by composer Pascal Dusapin.

It has been almost a century since a new work of art has been installed in the Pantheon – the most recent being the monument Aux Héros Morts Inconnus [To the Unknown Dead Heroes], by Louis-Henri Bouchard, installed in 1924.

The 2020 commission includes a vocal composition by Pascal Dusapin entitled In Nomine Lucis [In the Name of Light] and six vitrines by Anselm Kiefer. The works will be inaugurated in the Panthéon on November 11th.

The vitrines, a permanent installation, are emblematic of Kiefer’s visual vocabulary and include materials such as lead, barbed wire, flowers, stalks of wheat, and blocks of cement. Punctuated with quotes by Maurice Genevoix, the vitrines reference and commemorate those who fought for the country and those who were victims of war.

Having undertaken the commission during the lockdown period earlier this year, Anselm Kiefer was very engaged with the project and created two large-scale paintings in direct homage to Ceux de 14 [Those of 14], the major book by Genevoix. These two new paintings will be exhibited at the Pantheon for the first time and are currently on loan.

The artist has gifted the six sculptures to the patrimony of France – the country where he has lived for almost thirty years.

livestream of the Panthéon ceremony, 11 Nov 2020