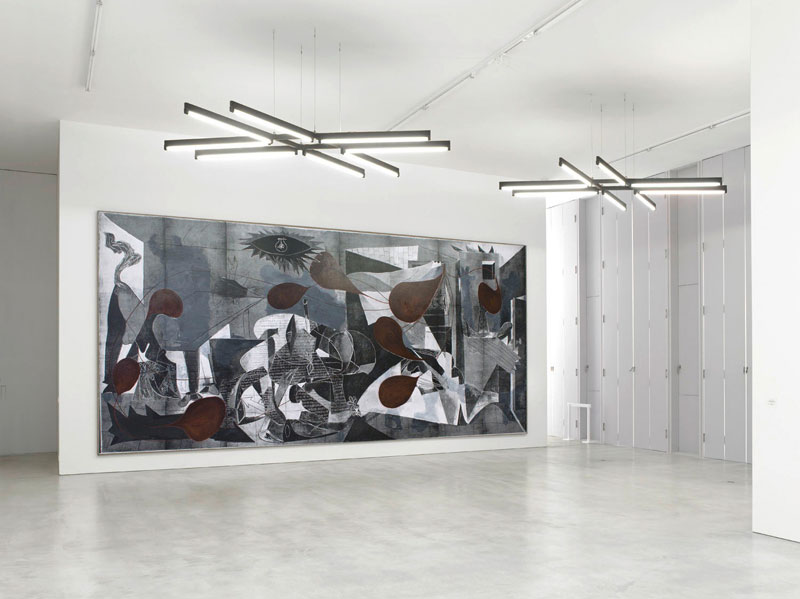 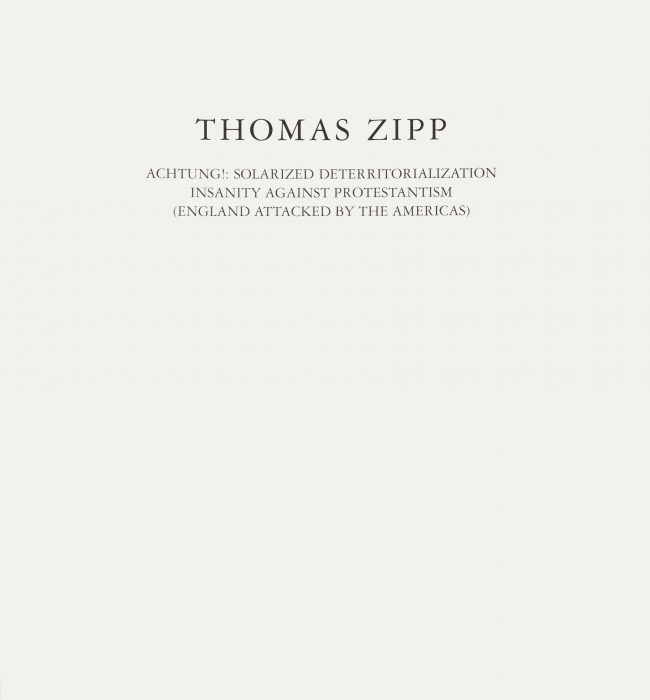 Collective Intelligence The ant species »Cataulacus muticus« lives inside a kind of bamboo. When it starts to rain, the ants protect themselves from flooding by using their heads as a kind of cork to block the opening of the stem. Any water that seeped in gets collected and, after the rain, discharged.

The broad, elaborate title for Thomas Zipp’s exhibition and painting requires some explanation: In what relation do the artist’s conceptual terms stand to Picasso’s grandiose painting, Guernica (1937), which served as Thomas Zipp’s point of departure for his own work?

Deterritorialization, i.e., appropriation and reframing: a new location and the visualization of cultural codes – the trademark of Zipp’s artistic oeuvre. As it pertains to the historical picture, solarization signifies a return of pictorial elements, the erasure and painting over of the figures in Picasso’s Guernica. A salient exception is the bird – for Picasso, a symbol of peace. In its place, one finds the formal vocabulary of the artist. The reservoir of the unconscious, framed and supplemented by text fragments citing, among others, Luther’s theses or Gilles Deleuze’s Anti-Ödipus – premises that critically interrogated the social structures and models of the time, investigated them and altered them. Insanity against protestantism and England attacked by the Americas, it says in the title; but it might just as well read The Americas attacked by England, because Zipp is not referring to an actual historical or political conflict. The topographies are readable as two interchangeable variables metaphorically representing the capitalist form of society. The artist himself describes his overpainted works as “schizophrenia.”

»The schizophrenic is someone who has been decoded, deterritorialized,« writes Deleuze in his sociocritical work, Anti-Ödipus; what is meant is schizophrenia as the quintessence of the unconscious. This is also the key to interpreting the works of Thomas Zipp.

In the second exhibition room, the artist shows for the first time his film, The World’s most complete Congress of RITATIN Treatments (2011), a transposition of his last performance. In it, ten “priestesses” have used music along with constantly repeated ceremonies of poetic-appearing rituals to dance themselves into a trance. They look like homunculi controlled by an alien force — the unconscious performance of a dervish dance. In his terminology, the artist refers to this trance or ecstasy as “White Dada” and ties it to adjectives like »happy,« »bold,« »dynamically violent,« »electrically charged.« The focal point consists of a kind of Kore or God-helmet that exhibition visitors may try on and, in doing so, feel magnetic impulses controlled by a computer.